Bibingkinitan Franchise is one of the brands of Food Asia Corporation.  It was established last 2006 and has grown into one of the leaders in its market in terms of revenues, market share and market presence.  To date, it already has over 200 stores spread in the Philippines and its currently branching out to Jakarta, Indonesia.

Bibingkinitan’s main product, as suggested by its name, is the Filipino snack “Bibingka”.  Bibingka is a Filipino rice cake that is popularly being sold during the Christmas season, especially right after the “Simbang Gabi” masses.

Together with their soft and moist bibingka, they also serve 100% Barako (Philippine Liberica) Coffee which is known for its full and strong flavor. 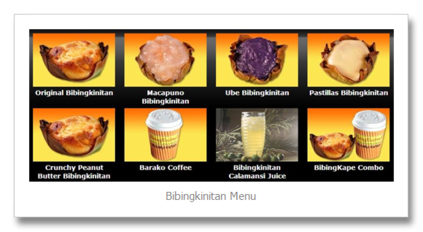 Bibingkinitan has proven its success with several awards and citations that were given to them.  Among them are the following:

Below are details regarding the Bibingkinitan Franchise.

Below is Food Asia Corporation’s, the company responsible for the Bibingkinitan Franchise, official AVP.

Husband and wife Ceferino (Mang Ferino) and Cristina (Aling Tinay) used to cook bibingka with 3 clay stoves on a very small spot with...