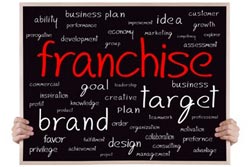 The licensing arrangement in a business where distribution of product or services can be done through registered dealers is known as “franchising”, the owner of the franchise is known as a “franchisor”, whereas a dealer who deals with the distribution of the products and services is called a “franchisees”. An individual has already done the work setting up the business in franchising.

The trend of running a franchise has rapidly increased and has become an essential part of America’s commercial area. Research indicates that the franchises have earned beyond $300 billion in the mid 1990s. A great contribution in reaching this figure has been done by companies like McDonald’s, Jiffy, The Gap who have established their presence in the form of numerous franchises at a large number of places, and it is estimated in the upcoming years that 50% of the U.S. retail sales will be earned through franchise outlets.

There are many Benefits of Franchise Ownership. A person who gets a franchise is in short establishing a branch of already well-settled company. The purchase of a franchise guarantees a track record of success. Buying a franchise gives immediate recognition to the business. A franchise is already well reputed in the market and among its competitors.

The business has been proven to work. Marketing tools as well as ad campaigns are offered. Most franchisors help make a chief local impact with an exposed launch of the business. Franchisees get ongoing support from franchisors. The franchisee benefits from low-cost price on goods for a retail store. In all aspects of the business, you are fully trained.

Mentioned above are some of the key benefits of purchasing a franchise that are gained by the owner instantly, however there are also many other benefits associated with the purchase of a franchise.

Advertising and Promotion: The Company provides every franchise with advertising material, such as poster, brochures, mobiles etc. they also benefit the franchise from launching national advertisement campaigns. This helps the franchise is saving the cost that was to be spent on the advertisements and its production.

Operations: Operations include material like inventory systems, financial as well as accounting systems, human resources and products and production machinery, etc. which is instantly provided to the owner of the franchise from the company, free of cost. Some of the companies also benefit the franchisees by giving them seminar workshops and conducting training activities for the new employees.

Why Investing In A Franchise Is A Smart Financial Move

A single person or a group of people who enjoy investing in businesses can own a franchise. It can be operated by a corporation...