Franchising Binalot is quite ideal. In this fast paced life that Filipinos lead, most of us tend to forget just what it means to live a comfortable life in the most traditional way. We eat at restaurants with our food placed in Styrofoam containers. Some are made poorly and the food that we consume tastes less than what we are accustomed to. The Western culture has instilled itself to us in just any way possible. It’s a great thing then that most restaurants aren’t swayed and has proved that they can hold their own when it comes to serving food in the Filipino way.

Binalot has been in the fast food market since 1996. A bunch of friends realized that the Filipino food can compete with just any type of food out there. They tend started Binalot and have started franchising it. Their inspiration led to the discovery of an age old but clever Filipino way of dining – food served in banana leaves. They started operating from a stall in Shaw. Now, they have blossomed into 37 stores, 10 of which are franchise stores.

It’s not hard to be part of one of the fast growing Filipino food chains out there. Here are some of their franchise packages:

Contract Term is for 6 years 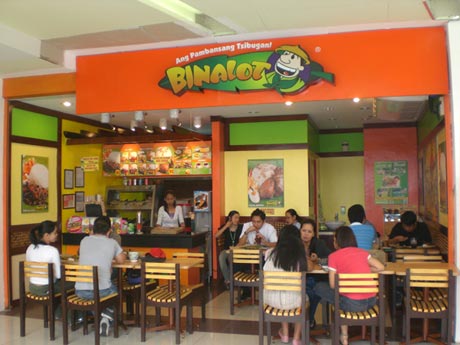 Use of the Name

Binalot has developed a business operations system that facilitates its branches to operate smoothly and profitably. This system was developed specifically for the use of our branches and will be handed down to the franchisee.

Since Binalot has its standard design, it has its own accredited contractor who would set up the store.

Marketing paraphernalia, such as banners, posters, streamers and flyers are to be provided by the franchisor especially on the opening day during promo launches and marketing activities. For System wide marketing, expenses incurred will be charged to the MSF of the company. For Local Store Marketing, the expenses shall be for the franchisee’s account.

Binalot has a team of competent and dependable people who conducts regular field visitations to give on-site assistance.

Of the earnings to be made monthly, the Franchisee shall remit a monthly Royalty fee equivalent to five percent (5%) from the Gross Sales and the Marketing Support Fund of two percent (2%). The said fee is due no later than 10 days after the end of each month. Failure to remit these royalty payments in a timely manner will result in a 1.5% interest charge for each month delayed to the franchisee’s account.

The franchisee is required to purchase all supplies, unless otherwise agreed upon by both parties to have an open market, utilized at the branch from the BINALOT commissary.

The Franchise Agreement between Binalot Fiesta Foods, Inc. and its franchisees will be valid for a period of six (6) years from the date of contract signing. The franchisee may have the option to renew the contract upon mutual agreement with the franchisor at 50% of the current initial fee of Franchisor, with the terms and conditions of the first contract.

For franchising Binalot inquiries, you can contact them at the following:

Sizzlers' Blends is a restaurant that provides its customers a new approach of casual dining and offers a wide selection of alluring and appetizing...