With the desire to develop alternative sustainable sources of energy, Bioglow, a biotechnology company from St. Louis, Missouri, has created the first plant able to produce light on its own without the use of electricity, chemicals or any other influence.

This autoluminescent plant was based on the research of molecular biologist Dr. Alexander Krichevsky, who’s been studying the biology of plants as well as the bioluminescense of aquatic bacteria. This research developed into a desire of creating more sustainable sources of light that can be used to light our homes. Dr. Krichevsky, together with technology entrepreneur Tal Eidelberg, created Bioglow, whose goal is to achieve this said desire. 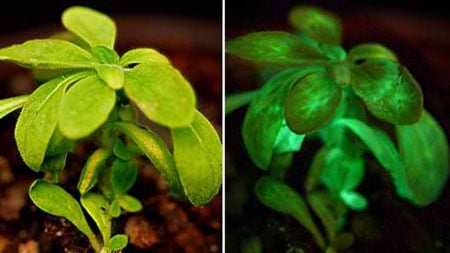 The idea of engineering plants to make them glow has been around since the 1980’s but it usually involves the application of some special dye, chemicals or UV light.  Bioglow’s development shied away to these concepts and instead utilized the rearrangement of DNA and encoded them into the plant at the cellular level to emit light. This process, unlike that of fireflies and other luminescent organisms, made sure that the plant would maintain a continuous visible light throughout its life cycle.

The first autoluminescent plant prototype, which they named “Starlight Avatar”, emits a faint light similar to that of a starlight, hence its name.

Bioglow will run an auction this January 31st, offering 20 of their autoluminescent plant prototypes to the public.